Faster computers with a GPS for electrons?

To build faster computers and larger memories physicists need to know the exact position of electrons in microcircuits. Prof. Michel Orrit and colleagues want to build an apparatus for that, with the help of a 0.5 MEuro investment from the Stichting Fundamenteel Onderzoek der Materie (FOM).

Prof dr Michel Orrit and Dr Sanli Faez, in collaboration with Dr Sense Jan van der Molen, have proposed a new platform to detect the charge distribution at the nanoscale. They even expect to be able to detect elementary particles, electrons, simulataneously, which is not possible with scanning probe techniques. 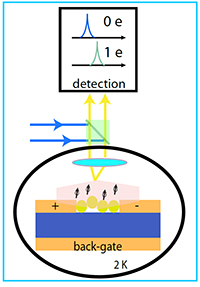 Organic dye molecules are immobilized over a network of gold nanoparticles. Charging and discharging of hte particles modifies electric fields, thereby shifting the resonance frequency (color) of individual molecules. These frequencies are read with high accuracy through high-resolution laser spectroscopy.

Instead of a single large reading device, the team will use a number of organic molecules as independent nanodetectors. They can be placed on top of a chip with gold nanoparticles and used to map the charge distribution of the chip. This is made possible by the large sensitivity of the molecular optical transition to spectral shifts caused by electric fields stemming from individual charges in the molecule’s environment. The resolution expected should be around a nanometer.

Orrit: “Our experiment can be useful to devise new methods for information storage and transfer, and to analyze scales smaller than current semiconductor transistors. This can in turn lead to faster computers with a larger storage capacity. It will help researchers get new insights into the physics of electronic components at such small scales.

Projectruimte proposals of FOM funds small-scale fundamental projects with an innovative character and with a clear scientific, industrial or societal relevance. FOM had a budget of 10 million Euro for 2015, from which 3 million were earmarked for projects within the Sectorplan Physics and Chemistry.