The Nederlandse Natuurkundige Vereniging and Stichting Physica have announced that Michel Orrit will receive the national Physica Prize 2016. Michel Orrit is honoured with the prize for his groundbreaking work on single molecule spectroscopy. In the mid ‘80s, Orrit came to the realization that it should be possible to optically detect a single molecule. A few years later, in 1990, he indeed became the first one to detect the fluorescence signal of one molecule.

Last year, the Nobel Prize in Chemistry was awarded to Betzig, Hell and Moerner for the development of super-resolved fluorescence microscopy. The Nobel Committee’s description of the scientific background clearly showed the groundbreaking significance of Orrit’s experiment as the basis for the super-resolution techniques that were established afterwards. Moerner measured a single molecule slightly before Orrit, using absorption, but Orrit’s measurement using fluorescence produced much less background noise and became the standard in this scientific field. 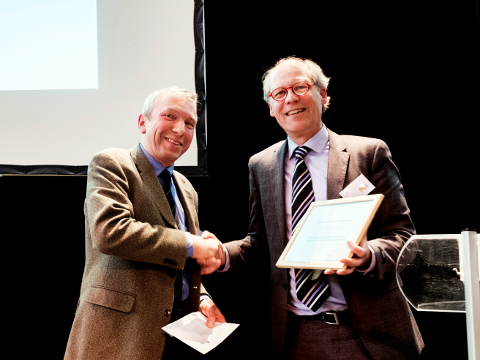