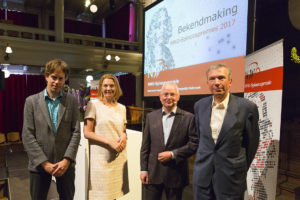 On 16 June 2017, the Netherlands Organisation for Scientific Research NWO announced that Professor Michel Orrit is among the winners of this year’s Spinoza prize.

The Spinoza Prize is the highest Dutch scientific award, and comes with a grant of 2.5 million euro to be spent on further scientific research. This high honour was awarded to Prof. Orrit in recognition of his seminal work in the field of single-molecule spectroscopy.